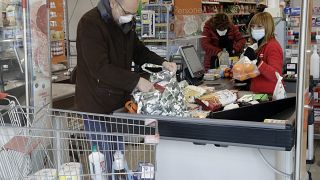 Residents in Casalpusterleno queued for food and supplies at a supermarket after the town was put under lockdown due to a coronavirus outbreak.

Police told those waiting to enter a supermarket, in Lodi Province, that staff were waiting for management to give them the go-ahead to open safely, given the numbers arriving to shop for food.

Several towns in northern Italy have been locked down after two people died in the country of the virus which was first discovered in Wuhan, China.

The Italian government decided to ban all traffic in and out of areas identified as outbreak hotspots.

There has been a sharp increase in cases in Italy over the past few days with more than 100 people testing positive for the virus.

A 77-year-old woman died on February 22 in the neighbouring town of Codogno, a day after a 78-year-old man died in the region of Veneto.

Many of those who gathered to stock up on supplies wore face masks which have been sold out in pharmacies.