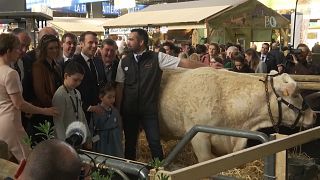 Macron, who spent the day shaking hands with farmers and tasting regional specialties, said farming was going through a transition.

He said he stood for an "ambitious budget" for the Common Agricultural Policy which he believed would help producers through the transition.

He said: "It's a policy of the future because if we want this climate, environmental and sanitary transition to be a success we need to change how we produce and we can do that through the CAP."

The fair is a hallmark of French politics with presidents turning up each year and spending hours between stands.