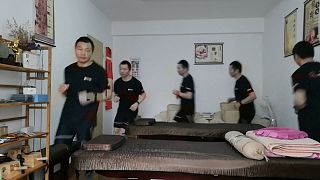 A runner says he jogged the equivalent of an ultra-marathon inside his small apartment - an insight into how virus-hit China is coping with being cooped up indoors.

Pan Shancu claims he ran 66 kilometres on a home course in six hours, 41 minutes. He has the data tracker that he says proves it, and the 44-year-old's feat and a video of him repeatedly circling the furniture in his apartment went viral in China.

"I felt a little dizzy at first, but you get used to it after you circle many times," Pan told AFP news agency by telephone from Hangzhou near Shanghai. "Running is like an addiction. If you don't run for a long time, you get itchy feet."

The country is at the centre of an outbreak of a new coronavirus, leaving more than 1,500 dead and sparking global alarm, but it is also in the grip of a health drive because the government is aggressively encouraging people to exercise to fight the disease.

With much of the 1.4 billion population ordered indoors and gyms closed, people are competing to outdo each other in how many bottles of water they can lift, how many push-ups they can do with their children on their backs or how many flights of stairs they can scale in their tower blocks.