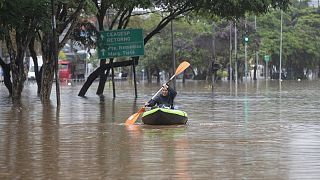 The Tiete and Pinheiros rivers in Sao Paulo overflowed, flooding nearby highways and trapping drivers and passengers for hours.

Parts of the city received 10 centimetres of rain in three hours, swelling the Tiete River to its highest level in 15 years, according to the state's infrastructure secretary.