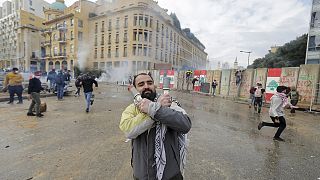 Lebanese security forces scuffled with protesters in Beruit on Tuesday ahead of a vote of confidence in the new government led by Prime Minister Hassan Diab.

MPs will vote on the government's policy statement, which lays out steps to tackle the country's crippling economic and financial crisis, the worst in decades.

Special forces and riot policemen were deployed on major roads in the Lebanese capital Beirut and its suburbs.

Security forces sealed off the zone leading to parliament to prevent protesters from blocking the path of lawmakers.

Protesters blocked roads further afield in an effort to prevent them from reaching the building.

During the parliamentary session, prime minister Hassan Diab is expected to set out the government's plan to try to get Lebanon out of its economic and financial crisis.

The protesters blame politicians for widespread corruption and mismanagement in a country that has accumulated one of the largest debt ratios in the world.