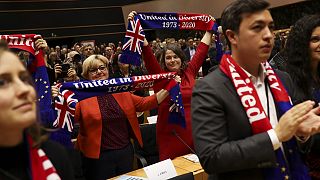 It comes as members of the European Parliament were set to approve the Brexit deal and seal the UK's departure from the bloc on Friday.

Richard Corbett, leader of the European Parliamentary Labour Party, told The Associated Press he left with "sadness" but "also a sense of pride" in what Britain had achieved while part of the bloc.

Preliminary votes in committees have already shown that the exit should be approved by a massive margin.

For many though, the first departure of an EU member after the group had grown from an initial six to 28 remains a body blow.

There still is a final session the British legislators can attend on Thursday, but then they have to vacate their offices.

Now, everything moves to negotiations on how to cooperate in the future.