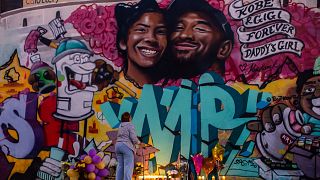 A mural honouring basketball legend Kobe Bryant and his 13-year-old daughter Gianna has appeared in Los Angeles hours after they were killed in a helicopter crash in Southern California on Sunday.

Gianna shared her father's passion for basketball and had ambitions to become a professional basketball player.

The pair were travelling to take part in a tournament in Bryant's Mamba Sports Academy where Gianna was due to play.

The mural is located on the corner of Pickford Street and Vineyard Avenue and features Kobe and Gianna's faces, with the words "Kobe & Gigi Forever. Daddy's Girl."

Thousands of fans, many wearing Kobe Bryant jerseys and chanting his name, gathered outside the Staples Center in downtown Los Angeles, home of the Lakers and site of Sunday's Grammy Awards, where Bryant was honoured.

The 41-year-old Bryant, who died with his 13-year-old daughter, Gianna, in a helicopter crash Sunday, was one of the game's most popular players, an 18-time All-Star who helped lead the Lakers to five NBA championships.