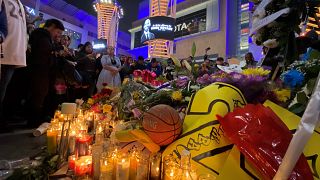 A sea of Kobe Bryant fans gathered at the Staples Center, the home of the Los Angeles Lakers, to pay respects to the late NBA legend.

Emotional fans comforted each other and held a vigil paying homage to the basketball star, who died in a helicopter crash in Southern California earlier in the day, along with his daughter Gianna and seven others.

Bryant, who was 41, inspired a generation of basketball players worldwide with his sublime skills and his unquenchable competitive fire.

He also earned the adoration of the people of Los Angeles during his two decades as the soul of the city’s beloved Lakers.

"He was the mayor of LA to me," said Rene Sotomayor, a 46-year-old Riverside resident who was wearing a Lakers cap and a T-shirt with a picture of Bryant wearing a crown.

"A lot of people are saying today's the day that part of L.A. died," he said. "I know I'm going to shed a lot of tears in the days to come."

Martina Araula, a 29-year-old Bellflower resident, said Bryant "had so much more that we were looking forward to."

"Basketball was done," she said. "We already accepted that, but he was still everywhere."

She said she looked up to Bryant growing up and that his relationship with his daughters was especially inspirational.

"The fact that he had daughters, and I was playing sports growing up and he was our icon and the fact that he was trying to push that this was going to be your next icon and she was his daughter ... I just appreciated that he cared so much about women's sports," she said.

Julie Sierra, a 24-year-old Los Angeles resident, said she was struck by the memorial and the fans because of the deep emotion.

"One thing that I had really noticed is for the number of people that are out there, it's silent," she said. "Everybody's in grief. Everybody's mourning. Everybody has respect for this man and his family and his daughter. It's painful. We really lost somebody legendary today."

William Anderson, a 30-year-old Long Beach resident, said that even though Bryant was from Philadelphia, "he is LA."