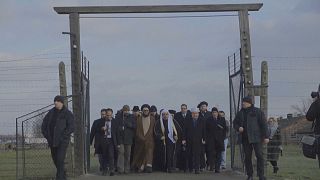 The Saudi head of the Mecca-based Muslim World League (MWL) called the visit to the Holocaust site by some 60 senior Muslim religious and community leaders from across the globe "a sacred duty and a profound honour."

MWL secretary-general Mohammad bin Abdulkarim Al-Issa knelt and bowed to the ground as he lead Islamic prayers next to the memorial monument honouring the more than one million people — mostly European Jews — that Nazi Germany killed at Auschwitz in Poland.

David Harris, a leader of the New York-based American Jewish Committee (AJC), which organised the visit, said it was the "most senior Islamic leadership delegation to ever visit Auschwitz or any Nazi German death camp".

The visit came ahead of memorial ceremonies on Monday at the former Auschwitz camp marking 75 years since the Soviet Red Army liberated it on January 27, 1945.

Of the six million Jews killed by the Nazis during World War II, a million were murdered at Auschwitz-Birkenau, mostly in its notorious gas chambers, along with tens of thousands of others including Poles, Roma and Soviet prisoners of war.

Operated by the Nazis from 1940 until its liberation in 1945, Auschwitz was part of a vast and brutal network of death and concentration camps across Europe set up as part of Nazi dictator Adolf Hitler's "Final Solution" of genocide against an estimated 10 million European Jews.

Once Europe's Jewish heartland, Poland saw 90 per cent of its 3.3 million pre-war Jewish citizens killed under Nazi German occupation between 1939 and 1945.