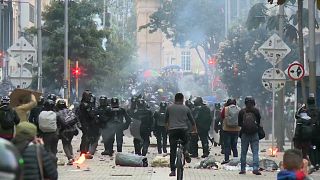 Hundreds of protesters took to the streets in Bogota on Tuesday to call on Colombian President Ivan Duque to abandon plans for tax reform.

Riot police clashed with demonstrators in the Colombian capital Bogota on Tuesday as anti-government protests resumed across the country.

The demonstrators took to the streets to demand free education and healthcare services.

They were also calling on the government to introduce measures to prevent the murder of human rights activists and to forge a peace agreement with leftist rebels.