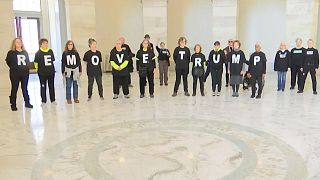 As the US Senate opened the impeachment trial of President Donald Trump on Thursday, protesters moved through the halls of the Capitol and staged a demonstration asking for his removal.

They held a silent demonstration and wore single lettered t-shirts that spelt "Remove Trump" when everyone was together.

"Stop the war" was also a slogan seen on placards held by some of those demonstrating.

The protesters later unfurled a large banner and chanted "Trump is a danger to our country" and "Trump is guilty".