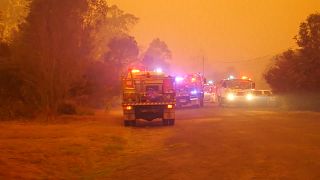 In the state of New South Wales in the country, emergency vehicles came out in a convoy to defend the small town of Burragate, which has a population of 30 residents.

As the sky darkened and the suffocating smoke spread through the village, it seemed imminent to volunteers at the fire station that the "beast" would finally roar.

But on this night, the forest fire only approached, pushing a few tentative fingers before going back to sleep when the winds died.

After a long night of worry, but also of camaraderie, Burragate's tired volunteer firefighters returned to bed early on Saturday. After a week of worry and false alarms, many have had enough.