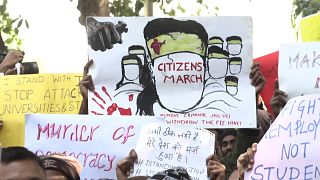 Hundreds of protesters, including students and professors from Jawahar Lal University (JNU) in Delhi marched towards an Indian ministry on Thursday amid anger over a recent attack on campus by masked men.

Chanting slogans of freedom, and demanding justice for victims of the attack, the protesters walked through central New Delhi, escorted by police.

Masked attackers on Sunday broke into the JNU campus and beat up students, professors, and vandalized a residence hall.

It comes amid simmering anger over the government's new citizenship law, which has resulted in violent protests and clashes around the country that have left at least two dozen people dead.