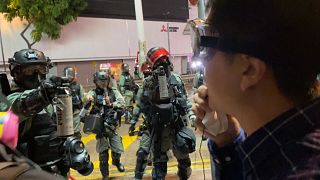 This is the moment Hong Kong legislator Ted Hui Chi-Fung was targeted in the face with pepper spray.

On Facebook, he reshared the video and wrote that he was uninjured, but added that the problem of “police violence would definitely be investigated".

It came as hundreds of thousands of people packed Hong Kong streets for a New Year's Day protest march as the months-long pro-democracy movement extended into 2020 with further violence between police and demonstrators.

Police said they arrested some 400 people for unlawful assembly and carrying offensive weapons as hard-line, black-clad youths broke off from the main group of marchers and attacked banks and ATM machines with spray paint, hammers and petrol bombs.

They smashed crossing lights, ripped bricks from sidewalks and barricaded roads in the financial district.

Police used pepper spray, tear gas and a water cannon to drive off the demonstrators, although a government statement said officers were “deploying the minimum necessary force."

The protests began in June over proposed legislation that could have allowed residents to be extradited to China where they could face possible torture and unfair trials. The legislation was withdrawn, but not before the protests expanded to wider calls for reforms in the semi-autonomous Chinese territory.