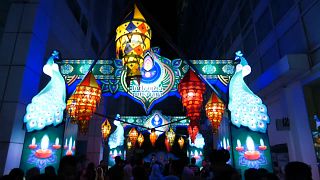 The Putrajaya Light and Motion Festival (LAMPU 2019) has returned for the seventh year, this time highlighting the ethnic and cultural diversity of Malaysia.

On the theme of "Beautiful Malaysia", the festival, which runs until 31st December, is aimed at promoting diversity as part of the country’s identity.

In addition to a colourful projection on the facade of the city's imposing Palace of Justice building, event also features several new attractions including 'Planetarium 360'.

Other attractions include fire-eating presentations and children's activities.

On New Year’s Eve, Putrajaya Square will be lit up with live and digital firework displays.