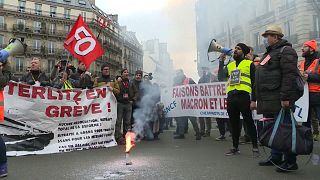 Industrial action against President Emmanuel Macron's reforms has crippled train services in the capital over the past two weeks and has also affected other main Paris stations such as the Gare du Nord, which handles Eurostar services to London and Brussels, and the Gare de l'Est.

Defying union anger, Prime Minister Edouard Philippe has said France would replace a convoluted system of more than 42 separate state-funded plans with a universal, points-based system that will apply to those entering the job market for the first time in 2022.

Philippe's office said it would restart talks with unions on pension reform on Jan. 7. Separate talks will also be held with teachers' and hospital workers' unions from Jan. 13, the government said.

Unions have already scheduled more demonstrations for January 9 against the reforms, which would scrap special regimes for sectors such as the railways and make employees work to 64 to draw a full pension.