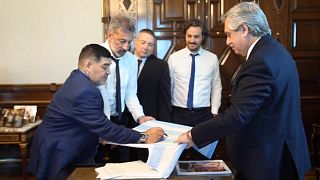 After the meeting, the current Gimnasia head coach went out on the presidential balcony in Buenos Aires posing for pictures while holding a replica of the World Cup trophy, just like he did in 1986 after winning the football tournament.

Maradona also greeted groups of people who gathered at the Plaza de Mayo, while they chanted and cheered their idol.