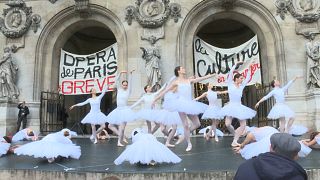 On the steps of the Opéra Garnier in Paris, dancers perform a piece from Swan Lake to protest against the French government's pension reform.

The dancers refuse to see their special pension scheme, which allows them to retire at the age of 42, disappear.

On the 20th day of the French transport strike, Christmas Eve for those in the capital is all about not missing the few trains still running.

Departing from Saint-Lazare station in Paris, travellers with their presents cram into a train on the J line. SNCF agents had to manually close the doors to deter late arrivals.