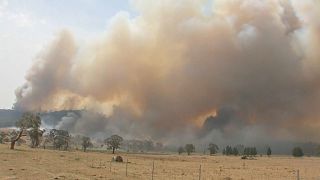 State of emergency declared as wildfires rage in Australia

Around 2,000 firefighters were battling the blazes, half of which remain uncontrolled, with the support of US and Canadian backup teams and personnel from the Australian Defence Force.

The last state of emergency ran for seven days in mid-November amid "catastrophic" fire risk and was the first implemented in New South Wales since 2013. Central Sydney reached a maximum of 39 degrees Celsius (102 Fahrenheit) on Thursday, while outer suburbs scorched at 42 Celsius (108 F).

A statewide total fire ban announced on Tuesday will remain in place until midnight on Saturday.

Around three million hectares (7.4 million acres) of land have burnt nationwide during a torrid past few months, with six people killed and more than 800 homes destroyed.

New South Wales Rural Fire Service Commissioner Shane Fitzsimmons said some firefighters had lost their own homes to the blazes and a firefighting crew in Bargo had sustained serious burns.

The annual Australian fire season, which peaks during the Southern Hemisphere summer, started early after an unusually warm and dry winter.

The heatwave is another alarm bell about global warming in Australia, where this year's early and intense start to summer bushfires has heaped pressure on the government to do more to tackle climate change.