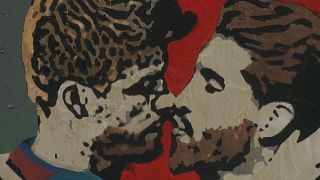 The graffiti appeared as the two sides prepared to meet at Barcelona's Camp Nou stadium in one of the world's most intense and bitterly contested sporting clashes.

The rescheduled game will take place amidst strict security, with supporters of Catalan independence promising to stage protests.