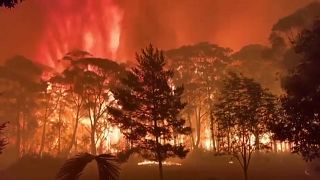 Dozens of structures were reportedly destroyed on Sunday.

The Gospers Mountain fire — a combination of several fires burning to the northwest of Sydney — stretches almost from Lithgow to the NSW central coast. This large fire continues to burn on multiple fronts, the NSW Rural Fire Service said.

More than 100 fires were burning across the Australian state on Monday, with authorities particularly concerned about a heatwave from Wednesday onwards.

Fire has consumed almost three million hectares of land across the state this season, supported by hot, dry and windy conditions.

The Bureau of Meteorology has forecast severe heatwave conditions for most of New South Wales throughout the week.

In Western Australia, a bushfire emergency warning remains in place for areas north of Perth, but conditions have improved for firefighters who have been battling the blaze for six days.

Authorities are hopeful the emergency warning will soon be downgraded, allowing some evacuated residents to return to their homes.