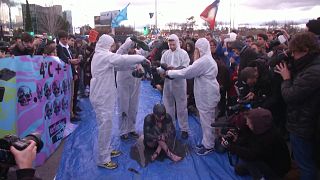 Climate activists staged a protest on Friday (December 13) in Madrid as politicians were running out of time to reach an agreement on the final day of the COP25 climate talks.

The activists, mostly supporters of the Friday's for Future and Extinction Rebellion movements, demonstrated near the venue where the talks were taking place.

One of the protesters sat on the ground and had a thick black liquid poured over him while others smashed pinatas shaped as planet earth.

The protest also came as Friday for Future founder Greta Thunberg arrived in Turin after a 24-hour road trip from Madrid to take part in another one of the protests.

The two-week UN COP25 conference, which was moved to Spain after social unrest erupted in Chile, was extended after delegates failed to reach an agreement.

Questions to resolve include finance to support the countries most vulnerable to climate change, rules guiding international trade in carbon credits, and whether big countries will give a strong signal of intent to curb emissions.

With the annual negotiations entering the traditional phase of last-minute brinkmanship, which can stretch deep into the night, some negotiators said they feared that the conference would end with weak resolutions.