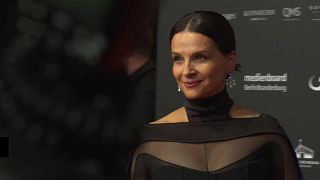 French actress Juliette Binoche, who appears first in the video compilation above, was toasted at the recent European Film Awards.

The star — known for her roles in Chocolat, Three Colors: Blue and The English Patient — was given a European achievement in world cinema award.

Meanwhile, German filmmaker Werner Herzog, director of Aguirre and Fitzcarraldo, was given a lifetime achievement gong.

Read more: The Favourite lives up to its name at European cinema's night of nights

The awards are the European equivalent of the Oscars and have been trumpeting the best of the continent's cinema since 1988.

This year, the ceremony was held in Berlin on December 7, in the presence of many heavyweights of European cinema, including Spanish director Pedro Almodóvar.