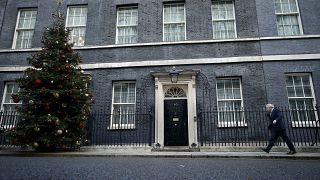 A hero's welcome for Boris at No.10

British Prime Minister Boris Johnson was given a hero's welcome on December 13, as he returned to 10 Downing Street from Buckingham Palace, where he had asked the Queen for permission to form a new government.

He is the 14th prime minister to be asked by the monarch to form a government.

Johnson won a resounding election victory that will allow him to end three years of political paralysis and take Britain out of the European Union within weeks.

The Brexit divorce represents Britain's biggest political and economic gamble since World War Two, cutting the world's fifth-largest economy adrift from the vast trading bloc and testing the integrity of the United Kingdom.