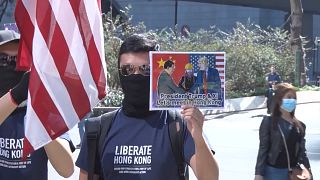 The protest movement in Hong Kong has been boosted by support from the US after Congress passed legislation that supports human rights and democracy in the territory. Attention is focused on how the Hong Kong government will deal with the situation.

A large crowd gathered for a rally on Hong Kong Island to thank the United States for the new legislation.

Demonstrators marched in a busy area of the Kowloon Peninsula. They called for a direct vote to choose the territory's chief executive. Police fired tear gas after some of the protesters threw bricks.

The Hong Kong government says eight people were injured at the weekend.

On Monday, a newspaper regarded as neutral reported that the unrest has not subsided. A pro-Beijing paper said the demonstrators caused turmoil again after taking a rest.

Hong Kong was relatively calm in the days before and after the district council elections on November 24.

But the movement is showing signs of regaining momentum. The protesters have been encouraged by the pro-democracy camp's landslide victory in the elections and the US legislation supporting democracy in the territory.

The Hong Kong government has indicated it will not concede to their demands.