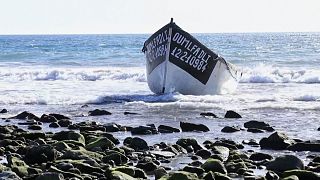 Sunseekers spring into action as migrants arrive at Spanish beach

Sunbathers soaking up the rays in the Canary Islands joined forces with emergency workers on November 29 after a rickety boat carrying two dozen migrants landed unexpectedly on a beach in the Spanish archipelago.

The migrants, among them three children and one pregnant woman, arrived midday on the rocky shores of the Aguila beach in Gran Canaria.

Seemingly exhausted, cold and some still in a state of shock after weathering the Atlantic, rescue services handed out thermal blankets, food and water. Red Cross officials said the migrants were from northern and sub-Saharan Africa.

Sunseekers also sought to help out, with one cradling a weary woman in her lap as another swimsuit-clad woman fed her water.

Some 27,594 migrants have arrived in Spain so far this year by mid-November, according to data from the Interior Ministry, a decrease of more than 50% from the same period last year.

The popular tourist destination of Canary Islands, however, has seen an increase of 22% in arrival this year, with 1,493 migrant arrivals so far registered by mid-November.