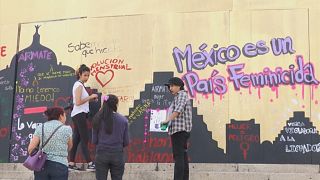 Women's groups held protests at the Angel of Independence monument in Mexico City before the International Day for the Elimination of Violence against Women on Monday, using tools that include crochet hooks and paint to address violence and machismo in his country.

Dozens of women painted on a protective barricade around the Angel of Independence monument on the city's main avenue on Sunday, while others wove purple and pink hearts to chain.

The barricade was erected after feminists disfigured the statue with graffiti in August to denounce the alleged violations committed by the police in the capital, as well as the high murder rates of women across the country.

On average, 10 women are killed every day in Mexico, making it one of the most dangerous places in the world to be a woman.

The threat of violence is exacerbated by impunity for most perpetrators: less than one in 10 murders are resolved in Mexico.

Participants in the art installation at the Angel, meanwhile, said Sunday's flood of creativity was a way to reinsert the conversation about violence and other injustices that women face in Mexico.