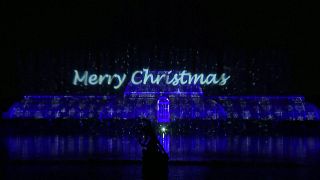 The Royal Botanical Gardens, in Kew, west London, glistened with over one million lights on Tuesday (November 19) as it readied itself for the festive season.

"Christmas at Kew" boasts several twinkling installations running along a 2.7 km trail, from a waterfall of lights cascading to the ground, to illuminated trees and projections on the iconic 'Palm House' Victorian glasshouse, complete with festive music.

Kew's Head of Event Operations Daire Basra said the event - in its seventh year - would take visitors to a "whole new area of the garden", including Temperate House, a Victorian glasshouse that recently reopened after a five-year restoration.

"I would hope that people take away a wonderful warm Christmas feeling from this," she said ahead of the official opening on Wednesday (November 20).