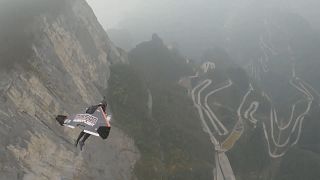 Vincent Philippe Reffet and Frederic Yves Fugen leapt from a helicopter and sped towards the Tianmen cave, near Zhangjiajie, in central China's Hunan province, at speeds of up to 385kph.

Using their jet propulsion to adjust their speed and directiojn, the duo passed though the 131.5-metre by 57-metre mountainside arch, which is also known as Heaven's Gate.

The naturally-formed cave lies towards the top of the Tianmen mountain and is about 1.5 kilometres above sea level. The area is accessible by cable-car.

The daredevil pair also showcased their remarkable courage with heart-stopping stunts in the sky above the mountain.