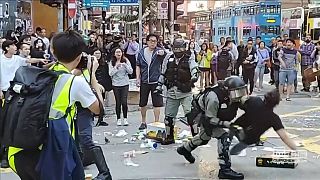 Video footage showed a protester lying in a pool of blood with his eyes wide open. Police also pepper-sprayed and subdued a woman nearby as plastic crates were thrown at officers.

A Cupid Producer representative, Lau Sui Yan, told Reuters that their videographer was filming rotesters barricading roads when they caught the shooting footage.

In the video broadcast on Facebook live, rush-hour commuters were seen alighting from public transport as the barricades brought traffic to a standstill, before turning to a commotion that preluded the gunshot.

Other social media videos show investigators visiting the site of the shooting.

The latest violence comes after a student died in hospital last week following a high fall as protesters were being dispersed by police.