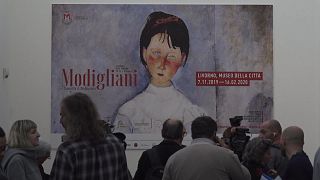 The figures are distinctly Modigliani, the elongated faces and bodies, sometimes the blank eyes. Each portrait telling a different story about the artist's life.

He experienced sickness in childhood which would later impact on his health in later life and also his ability to pursue his art.

Several of these portraits are of Jeanne Hébuterne whom he loved and lived with on the Cote d'Azur.

An exhibition in the artist's birthplace of Livorno, Italy, curated by Marc Restellini with Sergio Risaliti, has fourteen of Modigliani's paintings and twelve of his drawings which the museum says are rarely shown to the public.

Alongside Modigliani's works are 100 or so other masterpieces collected by Jonas Netter, which represent the École de Paris.

"It's very important exhibition even because it's in Livorno, native city of Amedeo Modigliani, 100 years from the death of the painter who became permanently famous when he moved to Paris, capital city of the twentieth century" Sergio Risaliti, art historian explains

The exhibition is called "Modigliani and the adventure of Montparnasse".

Paris' Montparnasse became a magnet for artists before the First World War.

As well as Modigliani and other artists, the district drew writers, poets politicians, and businessmen from all over the world.

It was where Modigliani could immerse himself in the latest schools and trends in art.

This exhibition includes a large selection of works the painters who shared passion for art.

They all come from the prestigious Netter and Aleksandre collections.

His artistic life spanned a little more than ten years, and even this was sometimes marred by his poor health and reduced finances.

Modigliani gained the esteem of his contemporaries during an era of artistic renewal.

Even Pablo Picasso, insisted on having one of his paintings for his private collection and he introduced him to his circle of artists, collectors and art dealer.

Risaliti believes Modigliani was deeply influenced by his environment.

"Modigliani knew how to soak up influences from everyone, especially where to find new life and inspiration in the non-European and non-traditional world. As a sea-faring man, someone who lived in a city with a harbour, the port of Livorno, he understood that you can't live there without encountering people coming into the port from elsewhere, with their primitive arts, archaic cultures, and far Eastern influences, that gave new vigour to the incredible language of Modigliani, he says.

Modigliani died poor and mostly underrated, but according to Restellini that did not stop him becoming a landmark in the world of art.

The exhibition will continue until February 16, 2020.