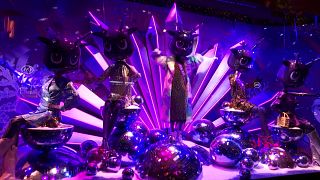 Festive window displays have been unveiled at Paris store Printemps, under the theme of "a very curious Christmas."

The displays feature animals in idiosyncratic scenes including turkeys dancing in a kitchen and a giant hen spraying herself with perfume and mice abseiling down a model of the store.

Printemps, which opened in 1865, was acquired in 1991 by French luxury tycoon Francois Pinault.