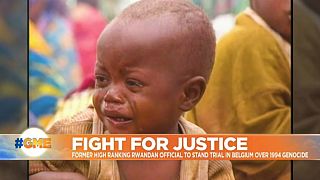 The trial of a former high-ranking Rwandan official accused of crimes of genocide is due to begin in Belgium on Monday.

For victims and their families, the case is a culmination of a decades-long fight for justice since the 1994 genocide which killed nearly a million people.

One of those family members is Martine Beckers. She lost her sister, brother-in-law, and niece to the Rwandan genocide. Today, as the person accused of being complicit in those murders stands trial, Beckers says it will represent a major milestone in her quest for the truth.

"I'm waiting but without believing the man responsible for the killings will finally face up to what's he's done. I'm waiting to understand. I'm waiting for justice," she said.

While this trial will focus on one person, Beckers says he is not the only one responsible for the death of her family members. She also wants UN peacekeepers who lived 500 metres from her sister's house to step up. She blames Belgian authorities for failing to protect them.

"My sister was very very scared. She hoped that the soldiers who were stationed near her home, the Belgian UN forces, would come and save her; that the embassy or consulate would intervene. But they did nothing," she said.

Between April and July 1994, the Rwandan genocide killed nearly 800,000 people according to the UN.