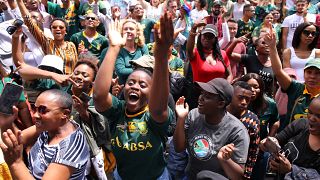 Johannesburg erupted into wild celebrations after South Africa's 32-12 victory over England in the World Cup final on Saturday.

Superb game management, set-piece dominance, brutal defence and almost flawless place-kicking looked like being enough to see off an England side that had dismantled the double defending champion All Blacks in the semi-finals last week.

The Springboks became the first team to lose a pool match at a World Cup and go on to win it, having lost to the All Blacks in their tournament opener at the same Yokohama International Stadium.

Among the crowd in Jo'burg, there was praise for Kolisi and his men and one spectator said the victory had reunited the country.

Even before the full-time whistle went, Sakhumzi bar in Johannesburg's Soweto township erupted into a frenzy of cheering and singing as South Africa closed in on a 32-12 victory over England.

The crowd at this outdoor bar on Vilakazi Street in Soweto - made famous by being the home of two of the most celebrated resisters of apartheid - late former President Nelson Mandela and Archbishop Desmond Tutu - reflected the harmonious multiracial society that South Africa still aspires to become.

Black, white and some mixed-race fans donned springbok shirts and shared drinks as their team dominated against England to bring the cup back home.

For many, this was South Africa's most unifying game of rugby since the 1995 final win against the All Blacks of New Zealand, when Mandela donned a Springbok jersey to unite a nation trying to heal the scars left over from racist white minority rule.

South Africans celebrated in the hometown of the Springboks captain, Siya Kolisi, as they watched their team beat England 32-12.

The supporters watching in the Zwide Township were dancing and singing throughout as South Africa dominated England to claim their third Rugby World Cup crown.