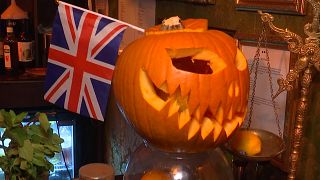 As the original Brexit deadline set on Halloween, there was a good excuse to host some bizarre parties and ridicule the UK's politicians.

Although there had been a further extension to Brexit, a theatre company found a creative way for this special Halloween celebration.

The Dot Dot Dot theatre company created a reproduction of Jeff Wayne's The War of the Worlds, a story about a Martian attack in a crumbling Victorian society, leading to an apocalyptic world.

Adding to the Brexit theme, an impersonator of UK Prime Minister Boris Johnson made a guest appearance.

Many at the party were celebrating the fact that the deadline had passed and the UK was still in the EU - for now.

Megan Stewart, from Scotland, said she felt relieved: "We want to have a party basically to celebrate Halloween and to celebrate the fact that it is not the end of the world, we are still safe for now."