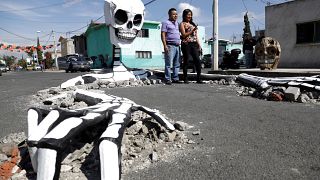 Skeletons 'come to life' in Day of the Dead tradition

A giant skeleton breaks out of the ground in the middle of a street, while the dead come alive wearing traditional outfits. No, it isn't a horror movie, it's a Day of the Dead tradition particular to the Mexico City neighborhood of Tlahuac.

The residents of one street in this area southeast of Mexico City's center create elaborate and macabre sculptures in the lead up to the November 02 Day of the Dead holiday.

Aside from the massive skeleton who appears to be rising from the street itself, the street's sidewalks are also full of catrinas or skeletons in traditional dress.

The Catrina was created by Jose Guadalupe Posada (1852-1913), a Mexican cartoonist illustrator and artist whose work has influenced many Latin American artists and cartoonists because of its acute satire.

The Day of the Dead is a pre-Hispanic tradition in which families remember their dead and celebrate the continuity of life. Mexicans set up offerings to the dead including photographs, food, candles, flowers, personal items, skulls made out of sugar, skeletons of paper mache and sweets.