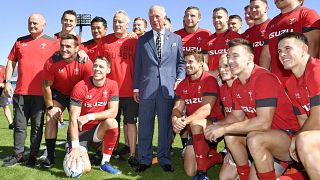 Britain's Prince Charles attended a Wales rugby training session in Tokyo on Tuesday (October 23) ahead of their World Cup semi-final against South Africa on Sunday.

Charles was presented with a Welsh rugby shirt by captain Alun Wyn Jones before posing for photographs with the team.

Wales assistant coach Neil Jenkins said: "For him to come along was brilliant, and I am sure it will give the boys a lift ... it was just a great honour for him to be there watching us."

Prince Charles' son, William, is a royal patron to the Welsh Rugby Union.

His other son, Harry, has a similar role with England's Rugby Football Union.

Wales, who have never won the tournament in its 32-year history, have played in two previous semi-finals, losing both of them.

Most recently, they lost 9-8 to France in the semi-finals in 2011 but they got a measure of revenge last weekend when they knocked the French out of the current tournament.