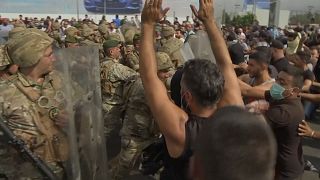 Schools, banks and businesses shut down as the protests escalated and widened in scope to reach almost every city and province.

Hundreds of people burned tires on highways and intersections in Beirut and other cities.

The protests were the largest since 2015, and could further destabilise a country whose economy is already on the verge of collapse and with one of the highest debt loads in the world.

The tension has been building for months as the government searched for new ways to levy taxes to manage the country's economic crisis and soaring debt.

The trigger in the end was the news Thursday that the government was planning, among other measures, to impose a tax on WhatsApp calls — a decision it later withdrew as people began taking to the streets.

Prime Minister Saad Hariri cancelled a cabinet meeting scheduled for Friday and was expected to address the nation later in the day.