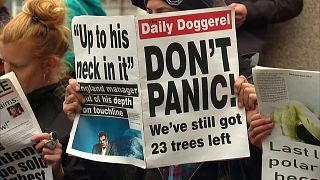 Climate change activists thronged the financial heart of London on Monday, blocking streets around locations such as the Bank of England and BlackRock, the world's biggest asset manager.

Activists demand that the world's major financial institutions stop funding what they describe as a looming environmental catastrophe.

Extinction Rebellion, which promotes revolt against established political, economic and social structures as a way to publicise its dramatic climate message, is in the middle of two weeks of civil disobedience in London.