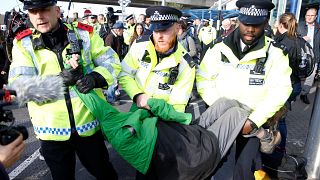 Several people have been arrested as dozens of Extinction Rebellion demonstrators staged a sit-down protest at an entrance to London City airport.

Protesters chanted 'fly today, gone tomorrow' as they sat at the exit of the airport’s Docklands Light Railway station, blocked by a line of police from entering the airport, just after 9 am on Thursday.

Police were picking up protesters and carrying them away, but some had glued themselves to the floor and to each other.

London City is the capital's fifth-biggest - and the most central - airport, popular with business travellers, bankers and politicians for short-haul and regional routes.

18,000 passengers are due to arrive or depart from the airport, with 286 flights scheduled.

Extinction Rebellion, which has targeted government buildings over the last few days, said protesters would lie, sit or glue themselves to "nonviolently use their bodies to close the airport."

All passengers travelling for the rest of this week will have to show their boarding passes to access the terminal.

Extinction Rebellion said that if protesters do not make it into the airport itself, they will occupy the neighbouring Docklands Light Railway (DLR) station and access road to blockade it from the outside.