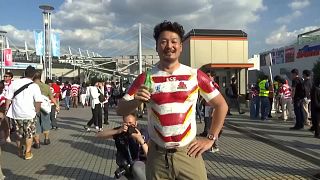 Japanese rugby fan Hiroshi Moriyama, commonly known as Bak-San, has become a hit at the Rugby World Cup as he embarks on a mission to paint the jerseys of participating teams on his torso.

The 53-year-old has tickets to watch 27 out of the 48 games during the cup and intends to paint all 20 teams' jerseys by the end of the competition.

On Wednesday (October 9) outside Shizuoka Stadium, he chose the Russian strip, having already worn Scotland's.

Rika, Bak-San's wife, is the artist in the family and using non-toxic body paint, each jersey takes about two hours to complete.

Bak-San is instantly recognised where ever he goes and fans cheer when he's seen on the stadium camera.

His antics have even been noticed by organisers of the event, who posted about him on the official Rugby World Cup Twitter account.

The twitter hashtag #BakSansBack has been used by spectators and fans to chronicle his body art.