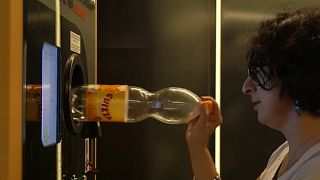 Not have enough cash for a metro ticket in Rome? No worries, just collect a few plastic bottles and you'll be able to ride for free.

Italy's capital is offering travellers a way to exchange their waste plastic bottles for tickets on its public transport system.

In San Giovanni metro station, commuters were queuing holding bags full of empty bottles to experience the program "+Ricicli +Viaggi" (the more you recycle, the more you travel) that allows passengers to return plastic bottles in exchange for a 5-cent credit that could be accrued and spent to purchase digital tickets.

Through the MyCicero app, users can scan their personal barcode on a special recycling machine, insert empty plastic bottles inside a compactor and digitally buy rides.

A standard ticket — valid for one metro ride or 100 minutes on all buses allowing transfers — costs 1.50 euros so 30 bottles are enough to afford it.

And Romans are enjoying this new way of saving cash.

But it isn't all good news.

The Eternal City is spiralling into decline with rubbish spewing out of bins and, after decades of neglect, tourists and residents can literally smell the problem affecting the city.

Rubbish litters the ancient streets, with hundreds of tonnes of garbage lying uncollected, with flies dining on rotten food, often in front of ancient monuments.

"The situation is quite disastrous," President of environment group Legambiente, Stefano Ciafani, said. "Rome has failed to create an efficient system for differentiated waste collection, as Milan has done, and it has not built the recycling plants that are fundamental for a city where three million people live. If the waste treatment plant is closed and no recycling plants are created on the territory, the waste will continue to be exported outside the region as it is today."

The eco-friendly trash-for-tickets initiative was launched by Rome Mayor Virginia Raggi on behalf of Rome's transport network, Atac. The recycling machines will be in placed in three metro stations for a 12-month testing phase.

But the capital has a long way to go before it catches up with other cities in recycling initiatives even if the new recycling program is a small step in the right direction.