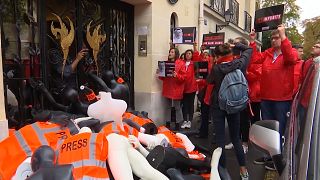 It was to mark a year since the killing of US-based journalist Jamal Khashoggi at the Saudi consulate in Turkey on October 2, 2018.

Agents of the Saudi government killed him inside and apparently dismembered his body, which has never been found.

Saudi Arabia has charged 11 people in the slaying and put them on trial, which has been held in secret.

As of yet, no one has been convicted.