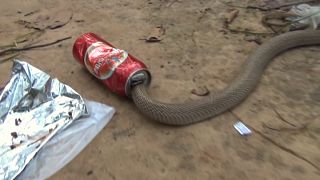 Thirsty cobra gets stuck in beer can

The trapped snake was found by a local resident who alerted rescuers. Two men reached the snake and managed to free it by cutting the beer can with a sharp knife.

Mayurbhanj district in eastern Odisha state has a thick forest cover which is home to a wide variety of wildlife. The Indian Cobra, also known as the Spectacled Cobra, is found in the forests of India and Southeast Asia.

The venomous reptile is listed as 'vulnerable' by the International Union for the Conservation of Nature because of habitat impairment.