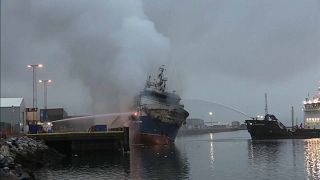 Norwegian authorities had to evacuate the port of Breivika on Thursday after a Russian tanker packed with 200,000 litres of diesel burst into flames and sank in the harbour.

The Norwegian public broadcaster NRK said the fire on the vessel named Bukhta Naezdnik started on Wednesday in Breivika in the Tromsoe region.

NRK said nearly 100 people had been evacuated from the area.