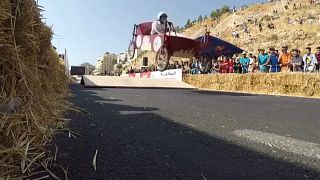 Jordanian racers riding self-designed cars that resembled a falafel sandwich or a giant mosquito showed off their skills in a soapbox race on Friday.

Nearly 60 contestants participated in the 350-metre race, which was held for the first time in 2015.

They were judged according to their vehicle's design, originality and speed.

Race winners, members of the Mad Men of Cheil team, will have the chance to attend the upcoming Formula 1 race in Bahrain.

The soapbox race is considered a modern imitation of the carts which American children used to build from used soapboxes during the 1920s.

The motorless-car race has become a worldwide tradition sponsored by the energy drink company "Red Bull."