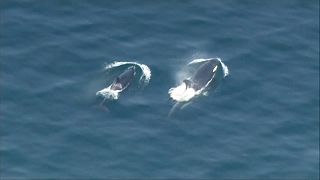 Pod of orcas spotted frolicking in water near Seattle

A pod of orcas was spotted frolicking in Washington state's Puget Sound on Friday.

The orcas, also known as killer whales, were seen surfing and breaching close to Bainbridge Island, near Seattle.

Whale experts said that the orcas are hunting for fish in the sound before they swim into rivers and canals.

Their appearance in the sound is a bit earlier than usual this year.