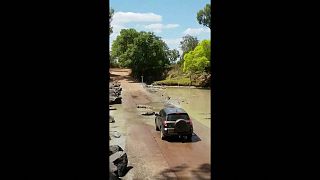 Vehicle stopped in its tracks by crocodiles lying in the road

A vehicle was stopped in its tracks in Australia's north on Sunday (September 15) by a group of saltwater crocodiles.

A video posted online by Kimberley Off-Road Adventure Tours shows the moment a car attempting to drive through Cahills Crossing was forced to stop and give way to the group of crocodiles lying in the middle of the road.

The tour company said that "there were over 30 salties there" as the car "had a bit of trouble with the peak hour traffic". The car was held up for nearly two minutes before it was able to pass.

Cahills Crossing is notorious for being one of the most dangerous roads in Australia, due to a large number of saltwater crocodiles that inhabit the surrounding waters and high water flow.