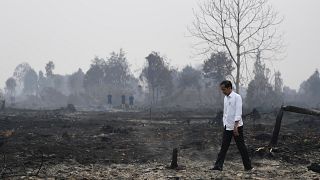 Burnt forests and consequences of the smoke

Indonesia President Joko Widodo on Tuesday (September 17) paid a visit to one of the burnt forests in Sumatra where artificial rain was dumped to put out the fires and called for an investigation into those behind it.

Indonesia and neighbouring countries in Southeast Asia are regularly hit by smoky haze from slash-and-burn clearances of forests for timber and palm oil plantations, but conditions this year have been the worst since 2015 due to an El Nino weather pattern causing an extended dry spell.

Tourists hoping to catch a view of Kuala Lumpur's famed skyline were left disappointed, as smoke from forest fires shrouded the Malaysian capital in a thick haze.

The Petronas twin towers, once the tallest buildings in the world, were barely visible from the Kuala Lumpur Tower Skydeck, where thousands of visitors go to enjoy panoramic views of the city. Large swathes of Malaysia have been covered in a cloud of haze as raging fires in Indonesia's Sumatra and Kalimantan provinces have been sending plumes of smoke into the skies.

Poor air quality and pollution have forced Malaysia to close hundreds of schools and the country has also carried out cloud seeding in several states in the hope of inducing rain.

Massive forest and land fires in Indonesia can potentially disrupt the health of orangutans and their natural habitats.

Staff at the Borneo Orangutan Survival Foundation in Nyaru Menteng are committed to working to save orangutans, who now hold the status of "very endangered."

The threat to the animals is increasing due to the expansion of the forest and land fires.