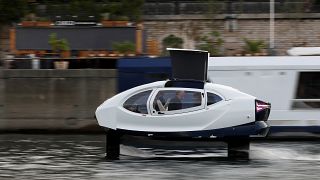 With air pollution a threat to Paris and transport lines bursting at the seams on rush hour, a startup is proposing a "flying taxi" as a greener alternative that makes use of the River Seine.

The Seabubbles startup, which specialised in "flying" vehicles, launched a four-day test run of their "flying taxi" on the Seine on Monday (September 16).

The "Bubble" is powered by electricity and lifts out of the water on "wings". A taxi service using the vehicles could launch in the city as soon as spring 2020 if the trials are successful, according to a press release from the Paris mayor's office.

The "Bubble" boasts green credentials such as being noisy and pollution-free.

Although the company is planning to soon launch commercial operations in Paris, their journey has not all been plain sailing.

During a preview on Monday morning before the official tests launched, Paris river police ordered the "Bubble" to stop its activity.

"We are waiting for the authorisation to have a commercial line between east and west…but have a look - there is absolutely nobody on the river", said Seabubbles co-founder Alain Thebault, arguing that France is becoming "like a museum" where tech innovation is too highly regulated.

Paris has one of the densest urban transport networks in the world, with over 650 trains running simultaneously at rush hour and 4.7 billion trips made by public transport in the Paris region in 2016, according to figures from Paris transport network Ile-de-France Mobilites.

To combat pollution, Paris tightened regulations in July, banning cars with diesel engines registered between 2001 and 2005 and trucks from 2006 to 2009 within the A86 ring-road area.

The city council plans to continually tighten regulations until 2030 when only electric or hydrogen-fueled cars will be allowed on Greater Paris roads.